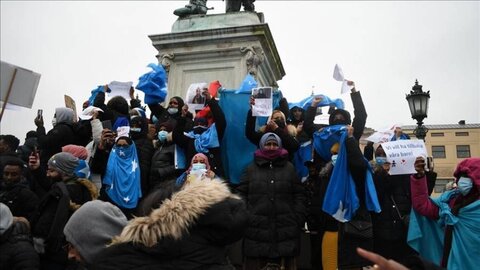 Protesters holding photos of their children gathered in Gothenburg’s Gustaf Adolf Torg Square and chanted slogans such as “Give us our children back,” “Our children were taken from us, we were subjected to injustice” and “We want justice.”

Swedish officials say that children are removed from their families under certain circumstances but have denied allegations of “kidnapping” and abuse of children.

Mikail Yuksel, head of the Swedish Nuance Party (Partiet Nyans), told Anadolu Agency that he supports the protest and sympathizes with families whose children have been taken away from their families, calling it a tragedy.

Yuksel said that many people sought his help to have their rights protected from state social services. While dismissing social media reports saying Muslim children were taken and given to Christian families as “rumors,” he said discrimination plays a role in the process.

A report has been prepared by the country’s Discrimination Bureau showing discrimination against immigrant families whose children have been taken away, he said.

Anders Ygeman, the minister for migration and integration, also said they are discussing the issue through dialogue with Muslim NGOs.

Ygeman also denied reports that Muslim children in Sweden had been “kidnapped” from their families.

Sunday’s demonstration followed up on a protest last week in front of the parliament in Stockholm in which Muslim families whose children had been taken away from them by social services accused it of mistreatment and abuse.

Separately, the city of Falkoping, western Sweden announced that it had ended a contract with a company that provides child care and is responsible for removing children from their families, state radio SR reported.

The Swedish Health and Care Inspectorate said in a statement that it had found violence and suspected sexual abuse associated with the company’s work.

“A very aggressive rumor campaign is currently underway on various social media – both in Sweden and abroad – alleging that Swedish social services kidnap, imprison and sexually exploit Muslim children. This information is, of course, seriously misleading and the sole aim is to create tensions and spread mistrust,” it said in a statement.

The statement added: “Swedish social services’ activities are governed primarily by the Social Services Act, which is based on the principle of voluntariness. However, complementary provisions in the Care of Young Persons Act make it possible in certain cases to decide on measures even without consent.